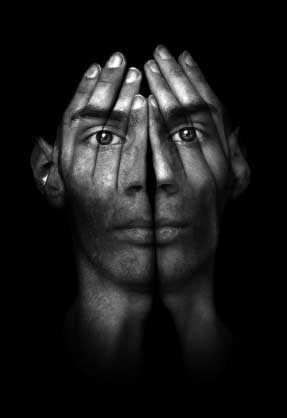 According to DSM-5, a personality disorder can be diagnosed if there are significant impairments in self and interpersonal functioning together with one or more pathological personality traits. In addition, these features must be;

(1) relatively stable across time and consistent across situations,

(2) not better understood as normative for the individual’s developmental stage or socio-cultural environment, and

(3) not solely due to the direct effects of a substance or general medical condition.

DSM-5 lists ten personality disorders, and allocates each to one of three groups or ‘clusters’: A, B, or C

The majority of people with a personality disorder never come into contact with mental health services, and those who do usually do so in the context of another mental disorder or at a time of crisis, commonly after self-harming or breaking the law. Nevertheless, personality disorders are important to health professionals because they predispose to mental disorder, and affect the presentation and management of existing mental disorder. They also result in considerable distress and impairment, and so may need to be treated ‘in their own right’. Whether this ought to be the remit of the health professions is a matter of debate and controversy, especially with regard to those personality disorders which predispose to criminal activity, and which are often treated with the primary purpose of preventing crime.

Cluster A comprises paranoid, schizoid, and schizotypal personality disorders. Paranoid personality disorder is characterized by a pervasive distrust of others, including even friends, family, and partner. As a result, the person is guarded and suspicious, and constantly on the lookout for clues or suggestions to validate his fears. He also has a strong sense of personal rights: he is overly sensitive to setbacks and rebuffs, easily feels shame and humiliation, and persistently bears grudges. Unsurprisingly, he tends to withdraw from others and to struggle with building close relationships. The principal ego defence in paranoid PD is projection, which involves attributing one’s unacceptable thoughts and feelings to other people. A large long-term twin study found that paranoid PD is modestly heritable, and that it shares a portion of its genetic and environmental risk factors with schizoid PD and schizotypal PD.

The term ‘schizoid’ designates a natural tendency to direct attention toward one’s inner life and away from the external world. A person with schizoid PD is detached and aloof and prone to introspection and fantasy. He has no desire for social or sexual relationships, is indifferent to others and to social norms and conventions, and lacks emotional response. A competing theory about people with schizoid PD is that they are in fact highly sensitive with a rich inner life: they experience a deep longing for intimacy but find initiating and maintaining close relationships too difficult or distressing, and so retreat into their inner world. People with schizoid PD rarely present to medical attention because, despite their reluctance to form close relationships, they are generally well functioning, and quite untroubled by their apparent oddness.

Schizotypal PD is characterized by oddities of appearance, behaviour, and speech, unusual perceptual experiences, and anomalies of thinking similar to those seen in schizophrenia. These latter can include odd beliefs, magical thinking (for instance, thinking that speaking of the devil can make him appear), suspiciousness, and obsessive ruminations. People with schizotypal PD often fear social interaction and think of others as harmful. This may lead them to develop so-called ideas of reference, that is, beliefs or intuitions that events and happenings are somehow related to them. So whereas people with schizotypal PD and people with schizoid PD both avoid social interaction, with the former it is because they fear others, whereas with the latter it is because they have no desire to interact with others or find interacting with others too difficult. People with schizotypal PD have a higher than average probability of developing schizophrenia, and the condition used to be called ‘latent schizophrenia’.

Cluster B comprises antisocial, borderline, histrionic, and narcissistic personality disorders. Until psychiatrist Kurt Schneider (1887-1967) broadened the concept of personality disorder to include those who ‘suffer from their abnormality’, personality disorder was more or less synonymous with antisocial personality disorder. Antisocial PD is much more common in men than in women, and is characterized by a callous unconcern for the feelings of others. The person disregards social rules and obligations, is irritable and aggressive, acts impulsively, lacks guilt, and fails to learn from experience. In many cases, he has no difficulty finding relationships—and can even appear superficially charming (the so-called ‘charming psychopath’)—but these relationships are usually fiery, turbulent, and short-lived. As antisocial PD is the mental disorder most closely correlated with crime, he is likely to have a criminal record or a history of being in and out of prison.

In borderline PD (or emotionally unstable PD), the person essentially lacks a sense of self, and, as a result, experiences feelings of emptiness and fears of abandonment. There is a pattern of intense but unstable relationships, emotional instability, outbursts of anger and violence (especially in response to criticism), and impulsive behaviour. Suicidal threats and acts of self-harm are common, for which reason many people with borderline PD frequently come to medical attention. Borderline PD was so called because it was thought to lie on the ‘borderline’ between neurotic (anxiety) disorders and psychotic disorders such as schizophrenia and bipolar disorder. It has been suggested that borderline personality disorder often results from childhood sexual abuse, and that it is more common in women in part because women are more likely to suffer sexual abuse. However, feminists have argued that borderline PD is more common in women because women presenting with angry and promiscuous behaviour tend to be labelled with it, whereas men presenting with similar behaviour tend instead to be labelled with antisocial PD.

People with histrionic PD lack a sense of self-worth, and depend for their wellbeing on attracting the attention and approval of others. They often seem to be dramatizing or ‘playing a part’ in a bid to be heard and seen. Indeed, ‘histrionic’ derives from the Latin histrionicus, ‘pertaining to the actor’. People with histrionic PD may take great care of their appearance and behave in a manner that is overly charming or inappropriately seductive. As they crave excitement and act on impulse or suggestion, they can place themselves at risk of accident or exploitation. Their dealings with others often seem insincere or superficial, which, in the longer term, can adversely impact on their social and romantic relationships. This is especially distressing to them, as they are sensitive to criticism and rejection, and react badly to loss or failure. A vicious circle may take hold in which the more rejected they feel, the more histrionic they become; and the more histrionic they become, the more rejected they feel. It can be argued that a vicious circle of some kind is at the heart of every personality disorder, and, indeed, every mental disorder.

In narcissistic PD, the person has an extreme feeling of self-importance, a sense of entitlement, and a need to be admired. He is envious of others and expects them to be the same of him. He lacks empathy and readily lies and exploits others to achieve his aims. To others, he may seem self-absorbed, controlling, intolerant, selfish, or insensitive. If he feels obstructed or ridiculed, he can fly into a fit of destructive anger and revenge. Such a reaction is sometimes called ‘narcissistic rage’, and can have disastrous consequences for all those involved.

Cluster C comprises avoidant, dependent, and anankastic personality disorders. People with avoidant PD believe that they are socially inept, unappealing, or inferior, and constantly fear being embarrassed, criticized, or rejected. They avoid meeting others unless they are certain of being liked, and are restrained even in their intimate relationships. Avoidant PD is strongly associated with anxiety disorders, and may also be associated with actual or felt rejection by parents or peers in childhood. Research suggests that people with avoidant PD excessively monitor internal reactions, both their own and those of others, which prevents them from engaging naturally or fluently in social situations. A vicious circle takes hold in which the more they monitor their internal reactions, the more inept they feel; and the more inept they feel, the more they monitor their internal reactions.

Dependent PD is characterized by a lack of self-confidence and an excessive need to be looked after. The person needs a lot of help in making everyday decisions and surrenders important life decisions to the care of others. He greatly fears abandonment and may go through considerable lengths to secure and maintain relationships. A person with dependent PD sees himself as inadequate and helpless, and so surrenders personal responsibility and submits himself to one or more protective others. He imagines that he is at one with these protective other(s), whom he idealizes as competent and powerful, and towards whom he behaves in a manner that is ingratiating and self-effacing. People with dependent PD often end up with people with a cluster B personality disorder, who feed on the unconditional high regard in which they are held. Overall, people with dependent PD maintain a naïve and child-like perspective, and have limited insight into themselves and others. This entrenches their dependency, and leaves them vulnerable to abuse and exploitation.

Anankastic PD is characterized by excessive preoccupation with details, rules, lists, order, organization, or schedules; perfectionism so extreme that it prevents a task from being completed; and devotion to work and productivity at the expense of leisure and relationships. A person with anankastic PD is typically doubting and cautious, rigid and controlling, humorless, and miserly. His underlying anxiety arises from a perceived lack of control over a world that eludes his understanding; and the more he tries to exert control, the more out of control he feels. In consequence, he has little tolerance for complexity or nuance, and tends to simplify the world by seeing things as either all good or all bad. His relationships with colleagues, friends, and family are often strained by the unreasonable and inflexible demands that he makes upon them.

Whatever the answers to these questions, they are bound to include a large part of subjectivity. Personal dislike, prejudice, or a clash of values can all play a part in arriving at a diagnosis of personality disorder, and it has been argued that the diagnosis amounts to little more than a convenient label for undesirables and social deviants.